Hi Everyone, This post is third in a series about the 1920’s fashion, lifestyle and history which includes the Prohibition Act and speakeasies that flourished as a result.

Bootlegging, prohibition, speakeasies? All sounds rather secretive and forbidden which makes it all the more fascinating, right?  According to www.american-historama.org/, “Speakeasies were illegal drinking dens, saloons or nightclubs that sold illicit alcoholic beverages during the Prohibition Era (1920 – 1933). Speakeasies (speak-easies) was a nickname for these bars because patrons had to whisper code words to enter the establishments.” I confess that this all sounds very intriguing to me and hopefully to you, too.

The Prohibition Act, also known as the Volstead Act was passed by Congress on October 28, 1919, over President Woodrow Wilson‘s veto.  Herbert Hoover called the Prohibition  “a great social and economic experiment, noble in motive and far-reaching in purpose” and became known as the Noble Experiment of Prohibition. But according to www.alcoholproblemsandsolutions, the Noble Experiment “failed miserably and was counterproductive; worse than doing nothing.”

I had the opportunity to go to a modern day speakeasy recently called 815 Cocktails & Provisions in Manchester, NH.  Their website is:  www.facebook.com/pg/815.  It was an amazing experience and will definitely go back. My husband and I entered what looked like an entrance to nowhere; see below. Is he the bouncer?

Once inside the door, there were no signs anywhere pointing to a drinking establishment. So we ventured up the stairs and saw another hallway that led to something that looked like a phone booth:

We then saw a buzzer, pushed it and waited for someone to open a hidden door at which point they quietly asked us for the “password.” The password can only be obtained by going to their website and the password changes weekly. The best part is:  I was asked to show my ID! Haven’t been asked that in a long time (ha!). Once inside, you immediately felt like you were stepping back in time, dim lighting, Victorian sofas, old chairs, black heavy drapes, and oriental carpets. 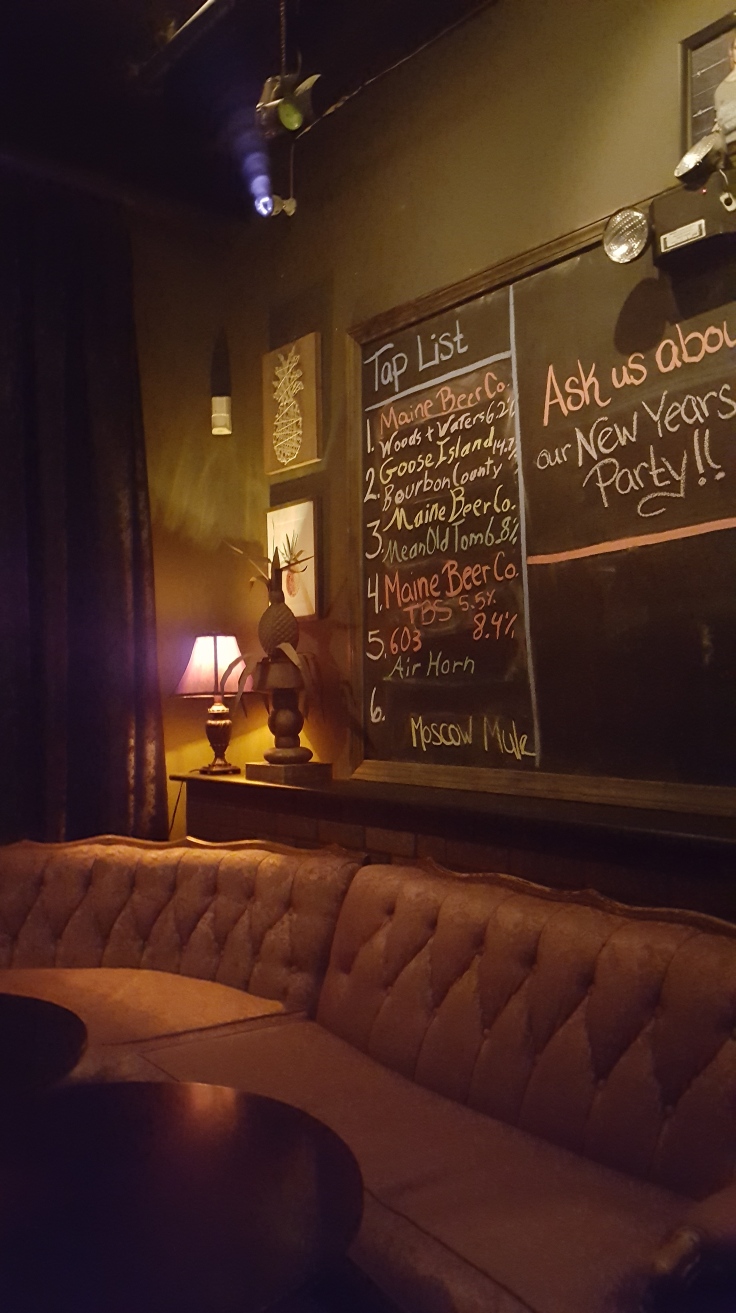 My armchair was very cozy and comfortable. They also serve food and snacks and we had the “lime-roasted chicken/queso/passila crema//pico de gallo/cilantro” tacos which was delicious! My husband had an “old fashioned” cocktail made with Old Grand Dad bourbon which he said was very “soothing.” I had a 603 Air Horn double IPA, of course. 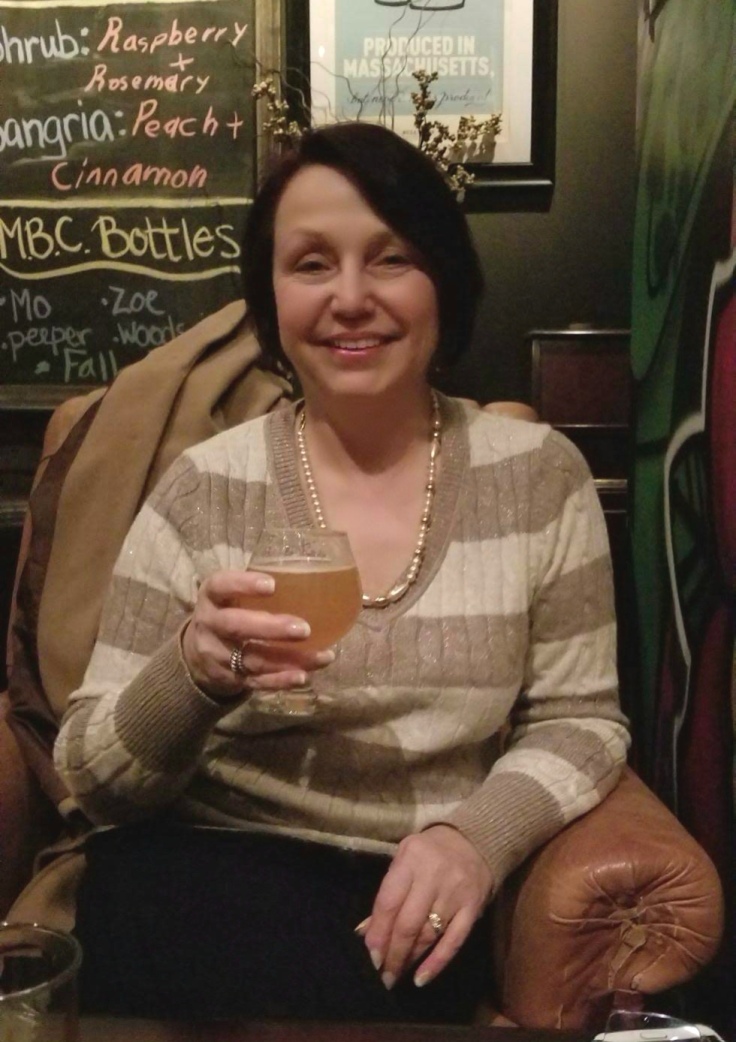 Here is a picture of the bar area. It’s a very cool place.

Loved this mirror in the ladies’ room. 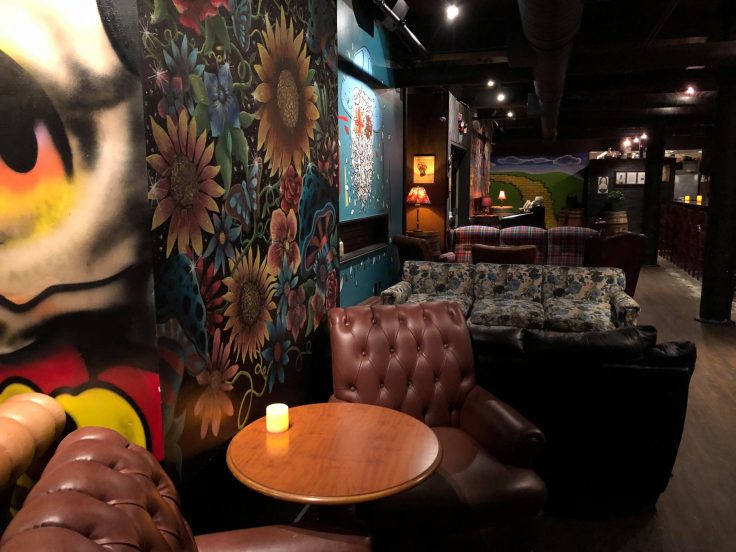 My experience at 815 Cocktails & Provisions was intriguing and I highly recommend it to anyone looking for a unique experience. The staff is extremely friendly and the service is super fast–cannot beat that combination! 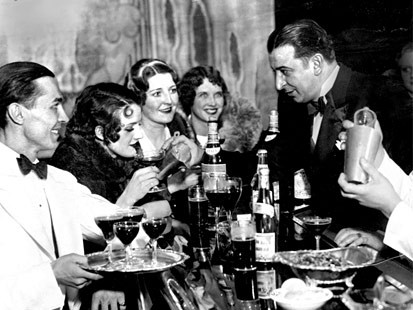 According to http://www.history.com, “in early 1933, Congress adopted a resolution proposing a 21st Amendment to the Constitution that would repeal the 18th. It was ratified by the end of that year, bringing the Prohibition era to a close.” 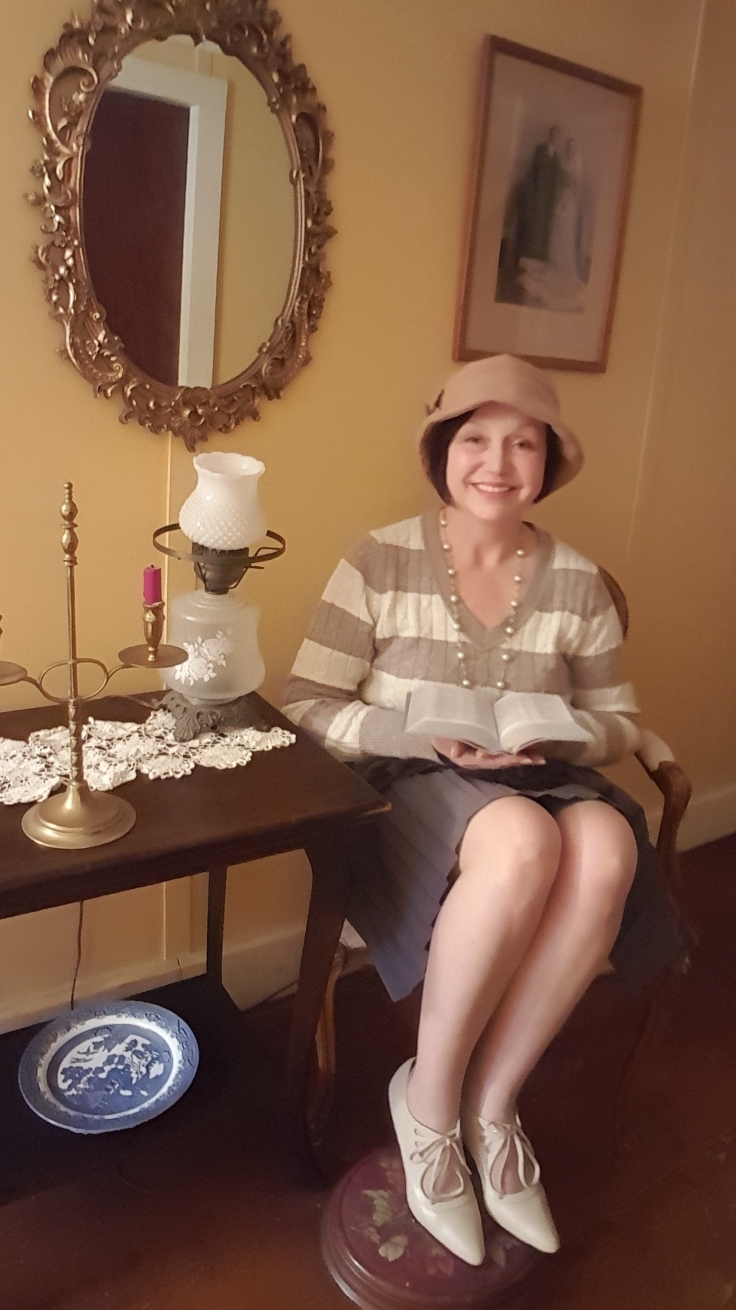 Yes, I am reading the Bible here, my favorite book.

Thank you for checking out my blog.  And special thanks to my handsome photographer!

One thought on “Speakeasies and the Prohibition”