Hello Everyone, I hope you all survived the holidays in splendid fashion with yet another one upon us, New Year’s Day. Today’s post strays from the subject of the Flapper era and is about my favorite poet, Emily Dickinson. By the way, sometimes I think I should change the wording of my blog to fashion for “women of all ages” rather than for “older women” as I focus on women’s styles all throughout the ages.

Emily Dickinson, considered one of America’s greatest poets, was born in Amherst, Massachusetts, on December 10, 1830, and died on May 15, 1886, at the relatively young age of 55. Even though she lived a short life, her poetry remains forever in our hearts and minds. While she was known for living a life of simplicity and seclusion (she was a recluse), she wrote poetry of immense power through the use of many metaphors and the ability to write effectively about her feelings. She provided a significant impact to American literature.

In spite of Dickinson’s prolific writing, it’s noted that less than a dozen of her poems were actually published while she was alive. She was literally an unknown poet when she died. However, her younger sister Lavinia discovered a collection of almost 1800 poems after Dickinson’s death!

You may wonder what this has to do with women’s fashion?  I am going to incorporate my favorite poet of all time, Emily Dickinson, with one simple fashion of her day which was the day dress or house dress. The 1850’s dress was still relatively conservative and not quite as elaborate as that seen in the coming Victorian era. Day dresses were common to this era although they still had a lot of fine intricate detail and did not seem conducive for house work in my opinion. I can see the bottom of those skirts catching on fire easily, too. (Both pictures are from Pinterest)

Below is a depiction of Dickinson from A Quiet Passion, a 2016 biographical film directed and written by Terence Davies about the life of American poet Emily Dickinson.

Emily Dickinson is portrayed by actor Cynthia Nixon (on the left) as the “reclusive poet.”

The white dress pictured below is thought to be the poet’s only surviving dress and belongs to the Amherst Historical Society in Massachusetts. The dress is a typical house garment of the late 1870’s and early 1880’s, worn when Dickinson was in her late 40’s and early 50’s. For many of Dickinson’s fans, the white dress symbolizes the essence of their beloved writer. There is an exact replica on display at the Dickinson Homestead (now part of the Emily Dickinson Museum) in Amherst.

According to the Poetry Foundation Library, “Dickinson seems to have adopted the habit of wearing white sometime in her thirties for reasons unknown.” It was reported in 1881 by Mabel Loomis Todd that “she dresses wholly in white, & her mind is said to be perfectly wonderful.” I love the “perfect” way that is worded.

The white dress above is my inspiration piece. Are you ready for this (and don’t laugh; well,  okay, you can a little)?  Here is my interpretation of the garment with items of clothing I already had. Do you think it looks better in a sepia tone or in color?

One of the candles below literally moved by itself during this photo shoot. Should I be concerned? 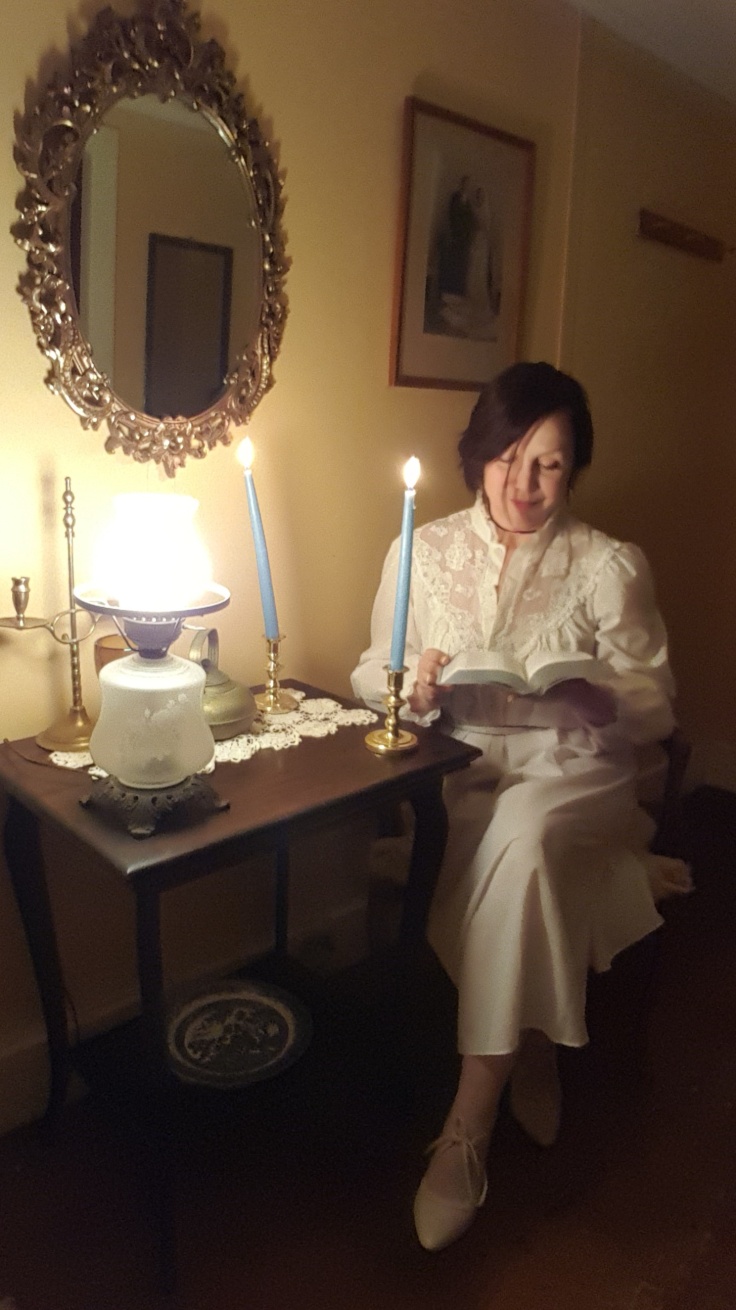 Here are two of my favorite poems by Emily Dickinson although I have more than two!

Far safer, of a midnight meeting
External ghost,
Than an interior confronting
That whiter host.

Far safer through an Abbey gallop,
The stones achase,
Than, moonless, one’s own self encounter
In lonesome place.

Ourself, behind ourself concealed,
Should startle most;
Assassin, hid in our apartment,
Be horror’s least.

The prudent carries a revolver,
He bolts the door,
O’erlooking a superior spectre
More near.

‘Hope’ is the Thing With Feathers

I’ve heard it in the chillest land—
And on the strangest Sea—
Yet, never, in Extremity,
It asked a crumb—of Me.

The only bird picture I have is our wild turkey that make their daily rounds even in winter although they are not “little” birds. This guy below took a selfie it seems.

Thank you for visiting my blog.