Hi Everyone, My husband has jokingly called me “Imelda” on occasion but I told him I have only 1,190 pairs of shoes to go to reach her staggering collection. I confess that I have a weakness for shoes especially high-heeled shoes so I’m dedicating this post to a brief overview of its history. Thank you, Imelda.

You may think of high heels as a relatively modern concept associated with only women but they were actually first worn by MEN. High heels reportedly go back to the 10th century and served a very practical purpose for the Persian cavalry who wore heels while on horseback so their feet would fit better in the stirrups. Also, did you know that Louis XIV wore them?

According to Lisa Small, who helped to create an exhibit devoted specifically to high heels at the Brooklyn Museum in New York: “Height and elevation has always had something to do with indicating class, privilege, power” and even the color of the heel. France’s King Louis XIV declared that only aristocracies could wear heels that were colored red and could only be worn at court, a law which existed only in France.

The French heel was of mid-height, curvaceous with an outward taper and later became known as the Louis heel after King Louis XIV. 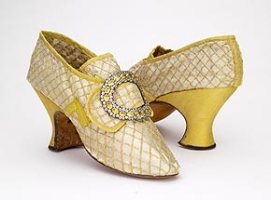 During the mid 18th century and what was known as the Rococo time period, heels became longer and more slender which contributed to the concept of eroticism or foot fetishism. As French gowns got longer hitting the ankle, there suddenly seemed to be an erotic interest in the high-heeled shoe, as it made the foot appear smaller and narrower, and gave the ankle a feminine delicate shape. Men were now wearing heels of less than an inch so that they could walk on cobbled streets that required a low-heeled shoe or boot. A refined lady, however, did not walk the streets but traveled by coach or other means so a high heel was appropriate for most occasions.

Below is a collection of footwear that would have been worn during the Rococo time frame. What do you think of the pastel colors and elongated pointed toe? 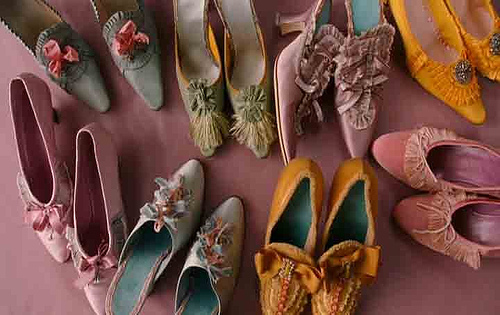 The footwear of the Rococo period ended with the French Revolution but its ideas strongly affected future fashions for decades.

It’s been noted that the height of heels can be an economic BMI indicator and in an economic downturn, the heels get higher as consumers turn to a more glamorous fashion statement as a means of escape and fantasy. At the peak of the economic crisis in 2009, the average height of women’s heels was at an incredible seven inches. In 2011, it reportedly dropped to just two inches.

I could not finish this post without mentioning Judy Garland’s ruby slippers in the Wizard of Oz.  The Wizard of Oz, produced in 1939, is considered to be the greatest film in cinema history. The ruby slippers were actually stolen in 2005 from a museum in Grand Rapids, Minn. But they were recovered  by the FBI in September of 2018. They are estimated to be worth at least 1 million dollars. 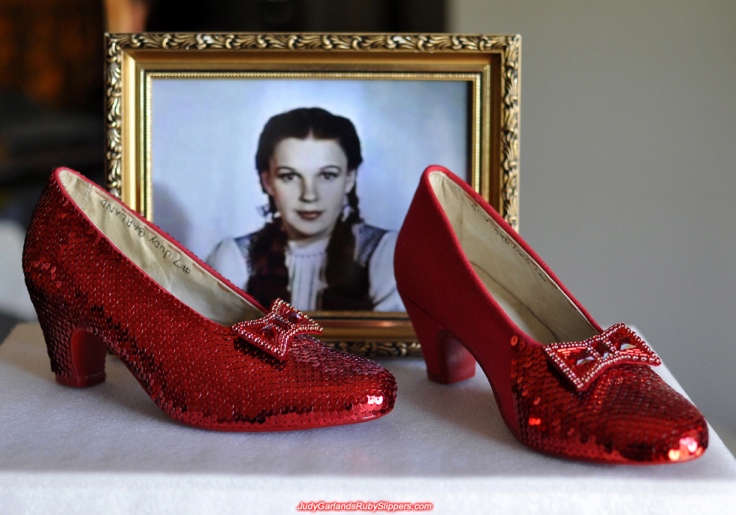 Here they are–the most iconic shoes in human history. The shoes were originally silver according to the first script. But the color of the shoes was changed to red in order to take advantage of the new Technicolor film process being used in that era. A number of pairs were made for the movie and five pairs are known to have survived.

Here is my modern version of the ruby slipper.

My yellow lab shared some of her fur on my shoes.

Gotta run and check out the latest shoe sales–thanks for stopping by.